MASTER
Home
About
Get There
Tickets

HEDWIG AND THE ANGRY INCH

By Dingbat Theatre Project (other events)

On July 27, 2021, the CDC recommended that everyone in areas with high COVID-19 infection rates (i.e. Florida) wear masks in public indoor spaces, regardless of vaccination status. This policy will be in effect for every performance for Hedwig and the Angry Inch August 27-September 11, 2021, as it will be performed INDOORS at The Bazaar on Apricot & Lime's indoor dining space.

Dingbat Theatre Project's Hedwig and the Angry Inch will be performed indoors at The Bazaar on Apricot & Lime in Hamlet's Eatery's indoor dining space. Performances begin August 27. Show up early to hear some great music, partake in great food from Hamlet's Eatery and Q&S Kool Cups, and snage your favorite seats because seating is first-come-first-served.

There are three ticket level options:
ROADIE SECTION ($25/ticket) - General admission seating is behind the roadie and peasant sections. We provide theatre seating in the middle and some bar stool seating near the back. Seating in this section is first-come-first-served, so show up early to grab your favorite seat.
PEASANT SECTION ($15/ticket) - Bean bag ground seating! Very limited amount per performance.

Tickets are non-refundable, and may be transferred to another date without charge up until 48 hours before the performance in question, pending availability. 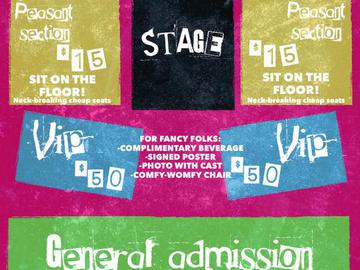 other events by this organization